If you have a wasp nest near you then you should do something about it. Build this homemade wasp trap and get rid of them in an effective and cheap way with household items.

A wasp is an insect that could result by combining a bee with an ant. They do not produce honey but their poison is more powerful than the one of a bee.

They are deadly for human being in large groups. They are used as pest control in the agriculture but in residential areas, they are nothing more than a latent danger.

A well-made homemade wasp trap can get rid of a whole nest if is used properly. The build is very similar to our previous homemade fly trap. It uses the concept of using a large plastic bottle with a special mixture inside.

How to Make The Best Homemade Wasp Trap 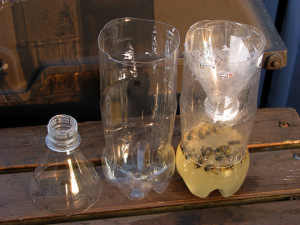 The first thing you need to do is to gather all the necessary materials for this homemade project:

Now just like in some of our other homemade insect traps, you need to take the plastic bottle and cut the neck off. Then flip it upside-down and then placing it into the bottle.

You might want to use some tape to keep it in place.

Then the only thing that you need to do is to put inside the bait and wait for the wasps to come. We recommend you to go for the soda and dishwashing liquid as a bait.

When the wings of a wasp are touched by the soap they lose the ability to fly. The shape of this homemade wasp trap avoid will provide easy access to the bottle but won’t let them fly out of it.

A modification for this homemade insect trap includes the addition of a rope or a hook to the bottle, allowing you to hang it close to a nest or the area that you would like to protect.

Remember that the wasp is still really dangerous for a human being if the problem seems too big for you to handle then go and contact an expert that will handle the problem for you. Safety is always first.